How long do spiders live?

Depending on the species, a few months to 40 years. House Spiders have the shortest life spans while tarantulas have the longest.

How many eggs can they lay? How soon do they hatch?

Female spiders fertilize eggs at will, meaning, once they mate with a male spider, they can save the sperm until they are ready to fertilize the eggs. Once fertilized, most spider eggs hatch within a couple of weeks.

This is not always the case. Sometimes a female spider decides to fertilize the eggs in cold months and the baby spiders will stay in the eggs until it is warmer. Some species can release their eggs from the egg sacs as they wish too. In general, spiders can lay hundreds of eggs at once.

What do spiders eat?

Typically, spiders are known to feast on insects. Some will eat seeds, pollen, nectar, honeydew, leafy matter and even silk from their own webs. Since spiders molt, they also feed on their exoskeleton. They also eat the insects they lure into their webs. The hunt and web making can take a lot of their energy, so they load up on the other foods to conserve it.

Why do spiders bite? Why do they bite in my sleep?

Spiders bite out of self-defense. They are not bloodsuckers and have no reason to bite humans.

Some think spiders only bite when one is asleep. Spiders might wander into a bed a few times a year and even less with proper preventative measures. Another fact to bust that myth is spiders fangs are under the spider. So, a roll over onto a spider while asleep would only crush the spider and would not give it the ability to bite. Spiders reflex when pushed on is to bite what is under it, likely bedding. However, if the spider is trapped in your clothing, it could result in a spider bite. Slapping a spider while it is on your skin will also cause the spider to have the reaction to bite what is under it.

A children’s book and movie was based around one amazing thing. A spider’s web. Seeing the morning dew glisten on a beautiful piece of art at sunrise is a sight to see! Some webs can be very intricate.

Spiders vs other bugs

Spiders and insects have a lot in common. Their bodies are divided into sections, they are invertebrates, exoskeletons and molting. The differences come in with the number of legs. Spiders have eight and insects have six. Spiders do not have antennae or wings like most insects.

Some insects look like spiders but are not. A spider cricket, (also called spricket, cave cricket or camel cricket) looks very similar to a spider and is often confused for as a spider. The biggest give aways for these crickets are they have antennae, only 6 legs and their back legs are typical cricket in appearance.

One group that is most commonly mistaken for spiders might surprise you that they are not actually spiders. Harvestmen, also referred to as “daddy-long-legs”. They are related to spiders and also classified as arachnids. Mites and ticks also fall under arachnids and can be confused as spiders.

Most common Types of Spiders in Ohio

can be found in all areas of Ohio and year round. They hid in cracks and out of the way areas of a house, garage or basement. Can also be found in outbuildings and barns.

often referred to as “cute” with a colorful body, fuzzy face and large eyes. They have excellent color vision which helps with hunting prey as well as mating. They can be found in structures and shrubbery.

can be found in all areas of Ohio. They create very large webs and can be found around the house, especially open porches. Many color varieties but the most common is an orange body with a white cross.

can be found in all areas of Ohio. Much like the Bull-Headed Sac Spider, they bite when threatened. They feed on “pillbugs” or “rolly-pollies”. They are often found near foundations of a home, under rocks or in basements. This brown spider is often confused for a Brown Recluse.

can be found in all areas of Ohio. Like to hide in gloves and when hand is placed in glove, they will bite. Not an aggressive spider but biting in self- defense. Bite can be painful but not serious. These spiders can be seen in homes, garages, under rocks and loose bark on trees. Dark head area with a cream colored abdomen.

male and females are both covered in iridescent scales which has a rainbow appearance with bright green typically dominating. They like to forage in sunny places close to the ground. Males have hairy front legs. They are usually found around shrubbery but also in and around structures.

can be found year round in all areas of Ohio. This spider is often associated with man-made structures. Its black body with white markings resemble a parson’s clerical robe. They can be found on the ground in buildings, usually in dark spaces. They are one of the most common spiders to find in homes.

can be found in all areas of Ohio. Often found near houses. They hold their legs in a curved manner similar to a crab while resting. They are active at night and are quick runners. Their flat bodies make it easy to slip into cracks and crevices making it difficult to see them when not moving. Their coloration can blend in well with tree bark.

can be found in all areas of Ohio. Light brown in color with a dark band running the length of the body. Can be quick runners if disturbed. Found in or near houses. They tend to stay close to the ground. They get their name from keeping their young protected in a nursery made of silk and bent, low to the ground leaves until they are ready to disperse. Poison ivy is often the plant of choice for these spiders.

can be found in all areas of Ohio and year round. These spiders create messy tangle webs in cellars and basements. They are the likely culprit of cobwebs found in basements. They are one of the most common human-associated spiders in the state. They can go weeks without eating. Females carry eggs in a basket made from silk in her fangs. If prey is found while holding eggs, she will temporarily hang the eggs in the web to go capture and eat the prey. Young spiderlings are so small that they can often move through window screens.

these spiders are black with a furry appearance and show active behavior. They will face and approach any movement, even something much larger than the spider itself like a human. They will occasionally wander into homes and other buildings. They prefer light sunny areas near windows. Their fang bases are iridescent green or blue-green which makes it very easy to spot this spider. They will approach and even jump onto an extended hand or finger and not in an aggressive way at all. They rarely bite unless they are handled in a rough manner. They do not spin a web, but they do lay a silk dragline as they move.

can be found in all areas of Ohio almost year round. This spider has adapted to habitats associated with humans such as buildings and gardens. In homes, this spider is active at night. It is a quick runner and uses nectar from plants as its energy source. During the day, the rest in corners of walls in a transparent silk cocoon. They, as their name states, are yellowish or pale green in color.

they have a bold appearance with black and white stripes. They are easy to identify at just a glance. They can be found on sunny vertical walls, fences and other structures like play equipment.

these spiders can be found all over the world. They are brown with cheetah like spots. Named the Spitting Spider for slowly moving towards its victim (usually another spider) and forcefully “spitting” a stream of glue from both fangs which immobilizes the prey. Once the prey is captured, the spider will bite the prey and release the venom and begin eating. Females hold eggs in a basket of silk under her body until hatched. Once they hatch, they stay in a tight cluster with their mother until they molt.

one of the most common structure spiders. Can be found away from buildings but not usually. They have a pale color abdomen with darker markings similar to a checkerboard.They hang in tangled cobwebs similar to widow spiders. Their cobwebs are usually indoors near windows. They have been reported to eat ants.

these spiders are very common both in and around most human structures in Ohio. Just one adult female can fill as many as a dozen egg cases with several hundred eggs in each. This spiders spiderlings are tiny and disperse widely. They create tangled webs that are commonly found around windows. Their egg cases are a tan, tear-dropped shape.

very common in Ohio, unlike the actual Black Widow. Both can be found in tangled cobwebs and hang upside down in those webs. Both have a shiny globe like abdomen that is dark or black. The False Black Widow does not have the red hourglass marking like the Black Widow. It is also not pure black but more of a purplish-brown. These harmless spiders can be found in garages and other outbuildings but males often wander to find mates and find themselves in houses around springtime.

All but one of the spiders that can be found in Ohio possess venom, but that venom has little to no effect on humans or even animals making most spiders in Ohio harmless to humans. Spiders bite out of defense. Some spider bites might be very painful or uncomfortable but are harmless except for the Brown Recluse and Black Widow.

The Brown Recluse is the most misunderstood spider in Ohio. They have been reportedly found in Ohio, they are very rare. There are no verified records of recluse spiders found outdoors in Ohio. The very few recored specimen have been found indoors in Ohio. They are typically only encountered during mating season as the males wander in search of females during the night. At dawn, when the males stop wandering, they will often lay in clothing or bedding on the floor. They have a dark brown violin shaped head area with 6 eyes in pairs with space between each pair. Both male and females are venomous. The bite is usually not felt, but results in a stinging sensation followed by intense pain as long as 6-8 hours later. 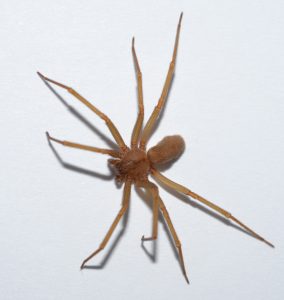 Black Widows are not nearly as common in Ohio as they are in southern states. Within Ohio, they are most likely to be found in the southern portion of the state. Females have a very distinctive shiny, very black body with a red hourglass marking on the abdomen. The southern Widow’s markings are connected while the northern Widow is two separate markings with space in the center. The much smaller males sometimes have white, red and black patterns. Males are not of concern since they lack the potent venom and rarely bite. Females are known to be especially aggressive after laying, and while guarding, eggs. Females are venomous and the pain from a bite is usually immediate, but not always felt. They commonly live in protected areas such as under stones or decks and in firewood piles, tree stumps and shrubs. They can be found in barns, outhouses, sheds and barrels. Indoors you might find them in undisturbed and cluttered areas of garages, basements or crawl spaces. They spin irregular, tangled webs that they usually build at night.

How to Prevent Spiders

GET THE BEST PROGRAM FOR YOUR PEST CONTROL NEEDS